Warning: A non-numeric value encountered in /home/gene/VCX3TDGI/htdocs/wp-content/themes/Divi/functions.php on line 5752

For the person who has everything, why not give them a Family Tree this Christmas. 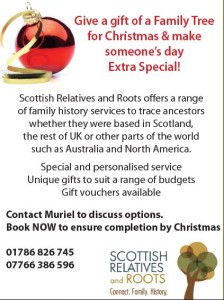 I spend a lot of my time researching other peoples’ lives and sometimes it is good to look closer to home and reflect on our own ancestors.  Therefore I supplied an article for Dunblane’s local magazine which describes how I discovered a sad and tragic story within my own family. Hope you enjoy it and if you feel you’d like to found out more about your own family’s past, please get in touch!

Researching family history can be an exciting, revealing and challenging activity which at once can be absorbing, addictive and even obsessive! The findings can solve mysteries, answer questions and equally reveal new ones, and often change lives and perceptions.  The activity offers a sense of fulfilment, reward and satisfaction. However, it can also be a very time consuming activity which requires huge commitment, patience and resilience, often encountering “brick walls”.

Prompted by the deaths of my parents some years ago, and never having met any of my grandparents, I felt that our immediate family were in danger of losing important information about the generations which preceded us with nothing to pass on to future generations.  I decided to find out more about my ancestors so that I could pass on a legacy to my future generations.  Little did I know that I would discover extraordinary facts and news about seemingly ordinary people.

When clearing out my parents’ house, I was fortunate to find a family bible which contained details of some my ancestors, and some WWI correspondence from the War Office which, together with an elderly aunt’s carefully documented collection of original source documents such as birth, marriage and deaths certificates, enabled me to begin the construction of a basic family tree which formed the basis for further research.

While I knew some of my mother’s side of the family, I knew much less about my father’s ancestors, and specifically his own maternal grandmother and grandfather. My father’s twin brother was Robert Scott and my aunt explained to me that Robert was named after my great grandfather, Robert Scott, of whom I had no knowledge.

The marriage certificate of Robert Scott and his wife, my great grandmother Margaret Gillies Peattie, showed that at the time of their marriage, Margaret was a nurse in a private home in Edinburgh and Robert was a gamekeeper, who was normally resident in Margham, South Wales.  This aroused my curiosity as I had always wondered why there was a gravestone for my great grandmother in Scotland, but not for her husband.

I discovered that the couple had moved to Margham after their marriage in 1893, and raised a family – my grandmother Daisy and my great uncle Robert Scott, or Bert. My great grandfather was the head gamekeeper for the Talbot Family, who owned Margham Castle Estate, Port Talbot at that time. On 8th June 1898, Robert discovered a poacher within the grounds who shot Robert fatally, once in the face and then in the shoulder. The poacher, Joseph Lewis, told his friends about the incident who informed the police and Lewis was arrested and tried for the murder of Robert Scott. Lewis was found guilty and was the last person hung publicly at Swansea Prison on 30 August 1898. The volume of newspaper articles that I was able to find about this whole incident were at once fascinating, detailed and harrowing.

The Talbots were extremely supportive and sympathetic to the bereaved family.  From original correspondence dated 19th June 1898 from Cavendish Place in London sent from the Talbots – the owners of the Margham Castle Estate at that time – it seems that they gladly provided a pension for Margaret in recognition of her husband’s work, and tragic death, and this enabled the family to move back to Dalkeith in Midlothian where the family settled, renting a cottage from the Buccleuch estate and enabling her to set up a small business as a shopkeeper. Daisy became a dressmaker, then ran the shop. Tragically, Bert was killed in action in the Somme in 1916, aged 20.

However, the terrible circumstances surrounding my grandfather’s death keep him “employed”. Using a variety of resources, I have learned as much about his life after death as of his life itself. This reveals that Robert is the resident ghost at Margham Castle, which is reputed to be one of the most haunted castles in Wales, hosting so-called “Fright Nights”!

I visited the Castle and the area four years ago where the Friends of Margham Castle society very kindly hosted a tour of the castle and I saw the staircase and corridors where Robert is reputed to walk and I saw his gravestone, and the estate which he managed. Uncannily, I also met the gentleman who conducts the ghost tours and who has met my great grandfather!  So a “virtual” family connection was made between 1898 and 2012, not something that everyone can boast!

If you would like find out more about your own family’s past, or want to satisfy any curiosity that you have about your ancestral roots, contact me today for a no obligation chat. muriel@scottishrelativesandroots.co.uk or phone me on 01786 826745

Just to thank Baseline in Stirling for taking forward my original website ideas and design and making the concepts into a working reality for me. I’ve had loads of compliments about the website since it was launched and their approach to working with their clients – friendly, creative, reliable, enthusiastic, professional – has helped me to move forward with confidence. Can’t recommend them enough. Thanks to Douglas and Angie.

Baseline is a long-established graphic design company based in Stirling, Central Scotland which offers a range of creative graphic design services.
THISISBASELINE.COM

I attended the latest event at Dunblane Local History Society on Tuesday 19 January 2016. Dr Murray Cook, Stirling Council’s archaeologist delivered a stimulating and interesting talk about the range of vitrified forts in both Stirling and the northeast but looking specifically at Dumyatt, Moathill and Abbey Craig. Essentially rock was burned at extremely high temperatures which fused the rocks, offering the opportunity for settlements in some cases, and strategic points for defence. It was interesting to learn that when the Romans passed through any area, wherever they stayed was generally understood to be the capital of the Roman Empire. Dunblane was chosen as a base for Septimus Severus on his travels so you could argue that Dunblane was the capital of the Roman Empire for one day at least!

Advert in theWire – Life on the Banks of Allan Water

Check out my first advert in the new look, theWire, the community magazine serving Dunblane and surrounding areas.

There has already been a positive and encouraging response to this promotion, it’s clear that people are interested in the origins of their families wherever they lived and worked!

Find out more about your own family’s history today by contacting me today at muriel@scottishrelativesandroots.co.uk

Why not make your New Year’s resolution to find out more about your family’s past?

How much do you know about your family’s history?

Have you ever wondered about the people and families who may have lived in your house before?

We offer a specialised, professional and personalised genealogy and family history research service which helps you make connections with your family’s or house’s past.

If you’d like to find out more information on any of these areas – or if you have any particular genealogy projects you’d like to discuss further – please contact us either by email, by telephone on +44 (0)1786 826 745 or through our on-line contact form here.